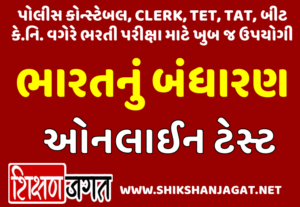 India, also known as Bharat, is a Union of States. It is a Sovereign Socialist Secular Democratic Republic with a parliamentary system of government. The Republic is governed in terms of the Constitution of India which was adopted by the Constituent Assembly on 26th November, 1949 and came into force on 26th January, 1950. The Constitution provides for a Parliamentary form of government which is federal in structure with certain unitary features. The constitutional head of the Executive of the Union is the President.

This Indian Polity Online Test simulates a real online certification exams. You will be presented Multiple Choice Questions (MCQs) based on Indian Polity Concepts, where you will be given four options. You will select the best suitable answer for the question and then proceed to the next question without wasting given time. You will get your online test score after finishing the complete test.