This is a great occasion for the youthful applicants who ask to serve under Ministries/ Departments/ Organizations of the Government of India. campaigners must read the detailed composition for eligibility, vacancy, important dates, payment details, test pattern, and syllabus regarding the SSC CHSL 2022.

The schedule for the SSC CHSL 2022 exam has been published by SSC along with its Official SSC Exam Calendar 2022. The SSC CHSL 2022 Online Registration is to be commenced from 06th December 2022 along with the release of SSC CHSL Notification 2022 and will continue till 04th January 2023. Please note down the important dates related to SSC CHSL 2022 Exam:

SSC CHSL Eligibility Criteria: The candidates must satisfy and fulfill the detailed eligibility criteria mentioned by the commission in the notification PDF. Age and educational qualification are important aspects for satisfying eligibility. We are discussing all the important eligibilities fulfilled by the candidates to register for SSC CHSL 2022.

The age limit mentioned in the official notification is as follows:

For LDC/ JSA, PA/ SA, DEO (except DEOs in C&AG): The candidates who are planning to appear in CHSL 2022 exam must have passed the 12th Standard or equivalent examination from a recognized Board or University.
For Data Entry Operator (DEO) in the Office of Comptroller and Auditor General of India (C&AG): 12th Standard pass in Science stream with Mathematics as a subject from a recognized Board or equivalent. 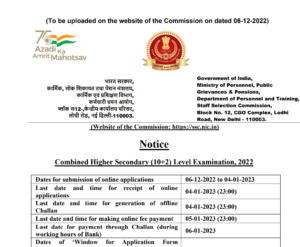 Before beginning the SSC CHSL preparation, it is important to make note of changes in the exam pattern and syllabus. The modifications to SSC CHSL Exam Pattern 2022 are given below:

• Introduction of a descriptive paper of 100 marks within 60 minutes in pen and paper mode.

• Reduction in the time limit for examination of Tier -I from 75 minutes to 60 minutes.

To get a detailed overview of the posts under SSC CHSL 2022, one must be aware of the pay scale given to the employees. Here is the salary structure for SSC CHSL 2022 according to the posts with pay band and grade pay revised as per the 7th Pay Commission. In the table given below, candidates can check out the post-wise pay scale.

Subjects of Tier I: