Badali Nava Niyamo 2022 The Gujarat government on recently announced significant changes in the rules for transfers of government teachers — Vidhya Sahayak, Prathmik Shikshak (primary teachers) and Mukhya Shikshak (senior most teachers) — in the state. Education Minister Jitu Vaghani called the changes in rules as “historic”, adding that it will benefit more than two lakh teachers in Gujarat.

Quoting Mr. Jitubhai Vaghani, an official release said that the rules for transfers of government teachers were framed in 2012 and considering demands from teachers’ bodies, Chief Minister Bhupendra Patel has given instructions to make important changes in it.

The minister added that the changes were decided after meetings among office-bearers of teachers’ bodies, secretary (education department) Vinod Rao and Director (primary education) Mahesh Joshi. The release added that the teachers bodies have welcomed the decision.

As per the new rules, teachers who have been transferred but have not been able to get relieved due to the rule that mandated not less than 10 per cent of staff strength in a school, will be relieved, the release said. It has been decided to relieve such teachers while considering them as special case, the release said.

In schools where the number of teachers comes to zero due to such relieving of teachers, the last teacher will be relieved only after the school gets a new teacher, the release added. This rule, the release said, will also apply to teachers who have been transferred in the past three years and not relieved. The government will also fill 100 per cent vacancies of teachers in a district through inter-district transfers. Earlier, rules allowed filling of only 40 per cent posts through inter-district transfers. 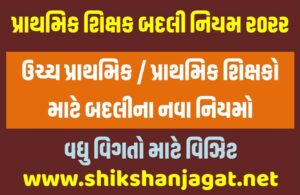 The new rules also waived off a provision under which inter-district mutual transfers were only allowed if the teachers were native of those districts. It has also been decided that teachers, who have been transferred to other schools from their parent schools owing to rendering surplus, can seek transfer back to the parent school in transfer camps.

Teachers who have been recruited with a condition that they will serve in one school for 10 years, can seek transfer in other districts after five years.

The state government has also introduced a rule under which if spouse of a government employee having inter-district transferable job is a primary or senior most teacher in a government school, the former can be appointed on deputation to the district of transfer of the latter. This will be applicable to grant-in-aid institutes, Gujarat government’s public sector units, and companies owned by central or state governments.

For transfer related grievance redressal of teachers, the new rules have provided constitution of a Grievance Redressal Committee. “With this, the teachers will not be required to file court cases unnecessarily,” the release said.