Gujarat Na Satyagraho PDF satyagraha, (Sanskrit and Hindi: “holding onto truth”) concept introduced in the early 20th century by Mahatma Gandhi to designate a determined but nonviolent resistance to evil. Gandhi’s satyagraha became a major tool in the Indian struggle against British imperialism and has since been adopted by protest groups in other countries.

Also Check : Devotional Saints Of INDIA | List of Saints of the Bhakti Movement

According to this philosophy, satyagrahis—practitioners of satyagraha—achieve correct insight into the real nature of an evil situation by observing a nonviolence of the mind, by seeking truth in a spirit of peace and love, and by undergoing a rigorous process of self-scrutiny. In so doing, the satyagrahi encounters truth in the absolute. By refusing to submit to the wrong or to cooperate with it in any way, the satyagrahi asserts that truth. Throughout the confrontation with evil, the satyagrahi must adhere to nonviolence, for to employ violence would be to lose correct insight.

Satyagrahis always warn their opponents of their intentions; satyagraha forbids any tactic suggesting the use of secrecy to one’s advantage. Satyagraha includes more than civil disobedience. Its full range of application extends from the details of correct daily living to the construction of alternative political and economic institutions. Satyagraha seeks to conquer through conversion: in the end, there is neither defeat nor victory but rather a new harmony.

The Kheda Satyagraha of 1917 was a satyagraha movement in the Kheda district of Gujarat in India organised by Mahatma Gandhi during the period of the British Raj. It was a major revolt in the Indian independence movement. It was the second Satyagraha movement, after Champaran Satyagraha. Gandhi organised the movement to support peasants.

In 1925, the taluka of Bardoli in Gujarat suffered financial troubles. However, the government of the Bombay Presidency had raised the tax rate by 30% that year, and despite petitions from civic groups, it refused to cancel the raise in the face of the calamities. The situation for the farmers was grave enough that they barely had enough property and crops to pay off the tax, let alone feed themselves afterwards. 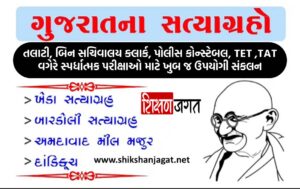 The Salt Satyagraha March or The Dandi March of 1930 as it is popularly known, is a landmark in the history of Indian freedom struggle. As a part of the Civil Disobedience Movement against the British rule, 80 Satyagrahis led by Mahatma Gandhi marched 241-miles from Sabarmati Ashram, Ahmedabad to the coastal village of Dandi and broke the Salt Law imposed by the British.

As was the symbolic nature of the event, it inspired millions of Indians to join the freedom struggle and brought worldwide attention to the movement. The Dandi March demonstrated the effectiveness of non-violent civil disobedience as a form of protest.

In 1918, the British authorities had increased the taxes of Kheda region by 23% while it was hit by Chappania famine and others leading to cholera and plague. Nadiad collector refused any aid from ‘Anavari’ system of taxes in spite of Sardar Patel and Mahatma’s meetings. Patel and his colleagues organised a major tax revolt, and all the different ethnic and caste communities of (Kheda) rallied around it. The peasants of Kheda signed a petition calling for the tax for this year to be scrapped in wake of the famine. The government in Bombay rejected the charter. They warned that if the peasants did not pay, the lands and property would be confiscated and many arrested.

Here Are most Useful PDF’s For Competitive Exams like GPSC UPSC, TAT, TET, HTAT, HMAT, GSSSB, GPSSB, Talati, Clerk, Banking Job and many more exams. Shikshanjagat Provides you the best study material in PDF’s that you can easily download and study it. Here are some links provided for GUJARAT NA SATHYAGRAH PDF.