National Symbols Of India India has many national symbols with which it identifies itself and takes pride in them. These symbols have been chosen from India’s unique flora and fauna, and its culture and civilisation. In a nutshell, these symbols say a lot about India. These symbols are intrinsic to the Indian identity and heritage. Indians of all demographics backgrounds across the world are proud of these National Symbols as they instill a sense of pride and patriotism in every Indian’s heart.

The Republic of India has several national symbols. The national symbols of India represent the culture and nature of India’s National Identity. They infuse a sense of pride and patriotism in every Indian’s heart. They were picked up at various times. Below is the list of National Symbols of Incredible India that one should be proud of.

The National Flag is a horizontal tricolour of India saffron (kesaria) at the top, white in the middle and India green at the bottom in equal proportion. The ratio of width of the flag to its length is two to three. In the centre of the white band is a navy-blue wheel which represents the chakra.

The top saffron colour, indicates the strength and courage of the country. The white middle band indicates peace and truth with Dharma Chakra. The green shows the fertility, growth and auspiciousness of the land. Its design is that of the wheel which appears on the abacus of the Sarnath Lion Capital of Ashoka. Its diameter approximates to the width of the white band and it has 24 spokes. The design of the National Flag was adopted by the Constituent Assembly of India on 22 July 1947. 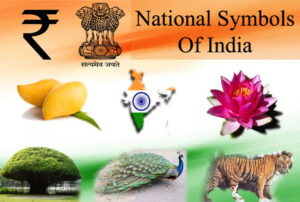 Here is the list of national symbols of India.

The Indian rupee (ISO code: INR) is the official currency of the Republic of India. The issuance of the currency is controlled by the Reserve Bank of India. The Indian rupee symbol is derived from the Devanagari consonant “र” (ra) and the Latin letter “R” was adopted in 2010. It has been designed by Udaya Kumar Dharmalingam. The INR depicts an equality sign that symbolizes the nation’s desire to reduce economic disparity. The design of the INR was selected from among five shortlisted symbols. According to Udaya Kumar the design is based on the Indian tricolour.

The National Pledge is an oath of allegiance to the Republic Of India. It is commonly recited by Indians in unison at public events, especially in schools, and during the Independence Day and Republic Day celebrations. The pledge was originally composed in Telugu language by writer Pydimarri Venkata Subba Rao in 1962. It was first read out in a school in Visakhapatnam in 1963 and was subsequently translated into various regional languages.