ICC T20 World Cup 2022 Schedule India will open their 2022 T20 World Cup campaign with a blockbuster tie against Pakistan at the iconic Melbourne Cricket Ground on October 23 this year as the International Cricket Council on Friday announced the schedule for the 2022 T20 World Cup.

India will open their 2022 T20 World Cup campaign with a blockbuster tie against Pakistan at the iconic Melbourne Cricket Ground on October 23 this year as the International Cricket Council on Friday announced the schedule for the 2022 T20 World Cup. It will be the first World Cup match between the two Asian teams at the MCG. India and Pakistan last played a World Cup match in Australia in the 2015 edition at the Adelaide Oval.

The eighth edition of the global tournament will begin on October 16, and played across seven venues in Adelaide, Brisbane, Geelong, Hobart, Melbourne, Perth and Sydney, with the final to be played November 13 at the MCG. The ICC event will kick off with defending champions and hosts Australia taking on Trans-tasman rivals New Zealand on October 22. A total of 16 international teams will clash in 45 matches as the pinnacle global event in men’s T20 cricket comes to Australia for the first time.

India, placed in Group 2, are joined by Bangladesh and South Africa, plus the winner of Group B and runner-up in Group A from the First Round. The Men in Blue will then take on the runner-up of Group A four on October 27, followed by a fixture against South Africa three days later on October 30, which is the second match of a double-header at Perth’s Optus Stadium. India will square off against Bangladesh on November 2 at the Adelaide Oval before facing Group B winners on November 6 at the MCG. 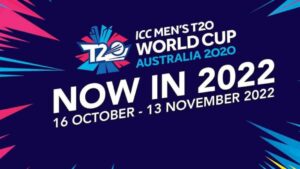 Rohit Sharma will be leading the Indian team after he was named the full-time limited-overs captain of the side last year in December. In the previous edition of the tournament, the side was knocked out in the group stages after heavy defeats to Pakistan (by 10 wickets) and New Zealand (by 8 wickets) in its opening two matches.

The edition in Australia was planned to take place in 2020; however, the Covid-19 pandemic forced its postponement to 2022. The 2021 T20 World Cup, originally scheduled in India, was played in the United Arab Emirates and Oman between October/November, in which Australia defeated New Zealand in the final to be crowned T20 world champions for the first time.

T20 is the global growth format for cricket and the ICC T20 World Cup 2022 will play a huge role in inspiring our next generation of players and fans as the world’s best players descend on Australia and showcase the very best of our sport. The release of fixtures is always a great moment in the delivery of a World Cup as fans start to get excited about opening games, head to heads and knock-out stages,” ICC CEO Geoff Allardice said.

This edition will run the Super 12 format, the same as last year’s. The first-round matches will be played in Tasmania and Geelong in the first week of the tournament, followed by six days of double headers which will then pave way for the Super 12s.

India vs Group A runner up, Sydney Cricket Ground – October 27