Sardar Vallabhbhai Patel Quiz : Vallabhbhai Jhaverbhai Patel endeared as Sardar was an Indian statesman. He served as the first Deputy Prime Minister of India from 1947 to 1950. He was an Indian barrister and a senior leader of the Indian National Congress who played a leading role in the country’s struggle for independence and guided its integration into a united, independent nation.

He was one of the conservative members of the Indian National Congress. In India and elsewhere, he was often called Sardar, meaning “chief” in Hindi, Urdu, and Persian. He acted as Home Minister during the political integration of India and the Indo-Pakistani War of 1947.

Patel was born in Nadiad, Kheda district, and raised in the countryside of the state of Gujarat. He was a successful lawyer. One of Mahatma Gandhi’s earliest political lieutenants, he organised peasants from Kheda, Borsad, and Bardoli in Gujarat in non-violent civil disobedience against the British Raj, becoming one of the most influential leaders in Gujarat. He was appointed as the 49th President of Indian National Congress, organising the party for elections in 1934 and 1937 while promoting the Quit India Movement.

As the first Home Minister and Deputy Prime Minister of India, Patel organised relief efforts for partition refugees fleeing to Punjab and Delhi from Pakistan and worked to restore peace. He led the task of forging a united India, successfully integrating into the newly independent nation those British colonial provinces that formed the Dominion of India. Besides those provinces that had been under direct British rule, approximately 565 self-governing princely states had been released from British suzerainty by the Indian Independence Act of 1947.

Patel persuaded almost every princely state to accede to India. His commitment to national integration in the newly independent country was total and uncompromising, earning him the sobriquet “Iron Man of India”. He is also remembered as the “patron saint of India’s civil servants” for having established the modern All India Services system. He is also called the “Unifier of India”. The Statue of Unity, the world’s tallest statue, was dedicated to him on 31 October 2018 and is approximately 182 meters (597 ft) in height. 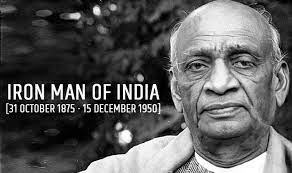 Patel practised law in Godhra, Borsad, and Anand while taking on the financial burdens of his homestead in Karamsad. Patel was the first chairman and founder of “Edward Memorial High School” Borsad, today known as Jhaverbhai Dajibhai Patel High School.

When he had saved enough for his trip to England and applied for a pass and a ticket, they were addressed to “V. J. Patel,” at the home of his elder brother Vithalbhai, who had the same initials as Vallabhai. Having once nurtured a similar hope to study in England, Vithalbhai remonstrated his younger brother, saying that it would be disreputable for an older brother to follow his younger brother. In keeping with concerns for his family’s honour, Patel allowed Vithalbhai to go in his place.

As the first Home Minister, Patel played the key role in the integration of the princely states into the Indian federation. In the elections, the Congress won a large majority of the elected seats, dominating the Hindu electorate. But the Muslim League led by Muhammad Ali Jinnah won a large majority of Muslim electorate seats. The League had resolved in 1940 to demand Pakistan – an independent state for Muslims – and was a fierce critic of the Congress. The Congress formed governments in all provinces save Sindh, Punjab, and Bengal, where it entered into coalitions with other parties.

Patel took charge of the integration of the princely states into India. This achievement formed the cornerstone of Patel’s popularity in the post-independence era. Even today he is remembered as the man who united India. He is, in this regard, compared to Otto von Bismarck who unified the many German states in 1871. Under the plan of 3 June, more than 565 princely states were given the option of joining either India or Pakistan, or choosing independence.

Indian nationalists and large segments of the public feared that if these states did not accede, most of the people and territory would be fragmented. The Congress, as well as senior British officials, considered Patel the best man for the task of achieving conquest of the princely states by the Indian dominion. Gandhi had said to Patel, ” The problem of the States is so difficult that you alone can solve it”.