Uttar Pradesh (UP), Uttarakhand (UK), Manipur, Goa, Punjab Election Results 2022 Live Updates: The counting of votes for the 690 seats spread across five states will begin shortly. As the results to the five-state Assembly polls start rolling in, all eyes will be fixed on the dead-heat race in Uttarakhand and Goa, where the both the BJP and the Congress are fighting out a fierce battle, according to the exit polls. While most pollsters believe it to be an easy ride for the BJP in Uttar Pradesh and Manipur, Punjab is expected to offer an unexpected change in power in the form of AAP.

In Uttar Pradesh, the parties to look out for today are the ruling BJP, Samajwadi Party, Congress and Bahujan Samaj Party. In Punjab, the battle is among Congress, BJP, Shiromani Akali Dal, Aam Aadmi Party and the newly formed Sanyukt Sangharsh Party, which was helmed by farmers at the forefront of the protest against the now-withdrawn contentious farm laws, and ex-CM Amarinder Singh’s Punjab Lok Congress. Goa, too, saw a multi-cornered contest with the BJP, Trinamool Congress, AAP and Congress in fray.

Uttar Pradesh, Punjab, Manipur, Uttarakhand & Goa are eagerly waiting for new power in their states.we already know the election commission of india will make its final verdict for the new governments in these states on 10 March 2022. still, many people believe in the exit polls declared yesterday on 7 March 2022. so one who is searching about the up exit poll 2022 must keep visiting our website regularly to get all the latest information regarding it.soon after the release of the uttar pradesh,uttrakhand punjab manipur & goa state assembly election final up election result 2022,we will provide the official information on our page. 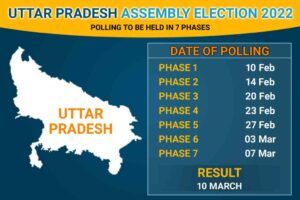 The uttar pradesh and four other states assembly election was made on 5 February 2022 by the chief election commissioner sushil chandra.according to the announcement, the first phase of voting was started on 10 february, while the last phase was on 7 March 2022, and vote counting is scheduled for 10 March 2022.this election will be held for a total of 690 assembly constituencies.

Moreover, as we know currently BJP is ruling in Uttar Pradesh and currently, Samajwadi Party is being seen as its biggest opponent in elections this year. So we suggest you to see this post till the end for complete information on UP Government Formation and Election Result. Also discuss in comments who will be the next CM of UP ?

UP And Other 4 states Result Live TV News Link