Guajarati Sahity Ni Pratham Kruti  The history of Gujarati literature  may be traced to 1000 AD, and this literature has flourished since then to the present. It is unique in having almost no patronage from a ruling dynasty, other than its composers. Gujarat Vidhya Sabha, Gujarat Sahitya Sabha, Gujarat Sahitya Akademi and Gujarati Sahitya Parishad are Gujarat-based literary institutions promoting the Gujarati literature.

Such factors as the policies of the rulers, the living style of the people, and the worldwide influence on society are important for any literature to flourish. In Gujarat, due to the development of trade and commerce, the religious influence of Jainism as well as Hinduism, and also due to the safety and encouragement of rulers like Chaulukya (Solanki) and Vaghela Rajputs, literary activities were in full force from the 11th century.

The Jain monk and scholar Hemachandra Suri was one of the earliest scholars of Prakrit and Apabhramsha grammars. He had penned a formal set of ‘grammarian principles’ as the harbinger of the Gujarati language during the reign of the Chaulukya king Jayasimha Siddharaja of Anhilwara. This treatise formed the cornerstone of Apabhramsa grammar in the Gujarati language, establishing a language from a combination of corrupted forms of languages like Sanskrit and Ardhamagadhi. He authored Kavyanushasana (Poetics), a handbook or manual of poetry, Siddha-haima-shabdanushasana on Prakrit and Apabhramsha grammars, and Desinamamala, a list of words of local origin.

During this period, the poetry dominated the literary activities. As Rasas written by Jain monks were a type of narrative poetry, Akhyanas are considered as their literary descendants which reached their glory in this period. Garbo and Garbi poetry associated with dance were developed as well as phagu and Barmasi genres depicting seasons. The types of pada: prabhatiya, dhol, kafi and chabkha were created. So the singable poetry, a tradition inherited from Apabhramsa, developed and dominated in the period. 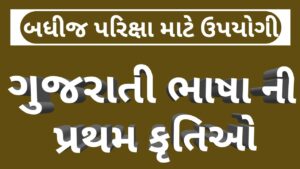 During the 15th century, Gujarati literature had come under the tremendous sway of the Bhakti movement, a popular cultural movement to liberate religion from entrenched priesthood. Narsinh Mehta (15th century) was the foremost poet of this era. His poems delineated a very saintly and mystical sense and bore an intense reflection of the philosophy of Advaita. Narsinh Mehta’s Govind Gaman, Surat Sangram, Sudama Charitra and Sringaramala are illustrations of this devotional poetry. Due to his poetic style, the works of contemporary and early poets were obscured.

Poets from the Swaminarayan sect such as Sahajanand Swami, Brahmanand Swami, Premanand Swami and Nishkulanand Swami also contributed immensely. Their works were focused on morality, devotion and reclusion. Parsi poets also entered Gujarati literature during this period. Their notable works are translation of Parsi religious literature in Gujarati. Eravad Rustom Peshot is considered as the first Parsi Gujarati poet who wrote biographies such as Zarthost-nameh, Siyavaksha-nameh, Viraf-nameh and Aspandiar-nameh.

From the middle of 19th century, Gujarati, like other regional Indian languages, came under strong western influence, precisely due to colonial residence and colonial reign. Western education and culture started to influence local culture and the awareness was spread about pervasive customs of Hindu society.

Two sections in society emerged: conservative following traditional customs as a cultural duty and liberal which believed in opposition and end of social pervasive customs and injustice So Prarthana Samaj, Arya Samaj, Theosophical Society were established which wanted to reform society through religion while other reformers believed in non-religious way of reform. Social reform was a central subjects in works of this era. Narmad, Govardhanram Tripathi and Gatubhai Gopilal Dhruv advocated reform through religion while Ramanbhai Nilkanth, Narsinhrao Divetia and Kant advocated non-religious way.

Pandit means ‘a scholar’ in Gujarati. During this era, the scholarly writing developed gradually, hence it is known as the Pandit era. The era is considered by Dhirubhai Thaker as a golden era of Gujarati literature when poetry, play, essays and biography reached its zenith. The writers of this era were authoring under the influence of westernisation and social reforms. In politics, it was a period of rise of Indian independence movement, established western education system and western study of ancient religious literature and cultural renaissance.

The foreign literature had started influencing local literature in India and people were exposed to the outer influence. The writers of this era also had a reformative bent of mind, but they paid more attention towards literary accomplishments.