Gujarat Na Mahanubhavo Ane Temna Upnam : One of the best known of the non-bhakti Gujarati poets is Premananda Bhatta (16th century), who wrote narrative poems based on Purana-like tales. Though his themes were conventional, his characters were real and vital, and he infused new life into the literature of his language.

Deeply influenced by the advent of British rule, the Gujarati literary scene in the year 1886 saw the Kusumamala (“Garland of Flowers”), a collection of lyrics by Narsingh Rao. Other poets of the late 19th and early 20th centuries include Kalapi, Kant, and especially Nanalal Dalpatram Kavi, who experimented in free verse and was the first poet to eulogize Mohandas K. Gandhi.

Himself a Gujarati, Gandhi admonished poets to write for the masses and thus inaugurated a period of poetic concern with changes in the social order. Many incidents in Gandhi’s life inspired the songs of poets. That period in Gujarat, as elsewhere, gave way to a period of progressivism, as seen in the class-conflict poetry of R.L. Meghani and Bhogilal Gandhi. In postindependence India, poetry tended toward introspection. However, the modern forms have not superseded the traditional verse of devotion to God and love of nature.

Indo-Aryan member of the Indo-Iranian group of Indo-European languages. Gujarati is officially recognized in the Indian constitution and is spoken by more than 46 million people. Most of these reside in the Indian state of Gujarat, though there are significant diaspora communities around the world, especially in the United Kingdom and the United States. 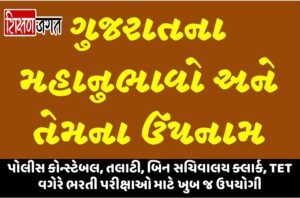 The development of the language can traced to approximately the 12th century CE. Gujarati inflection is fairly complex, marking three genders (masculine, feminine, and neuter), two numbers (singular and plural), and three cases (nominative, oblique, and agentive-locative) for nouns. It is usually written with a cursive form of Devanagari script.

Differences in religion, caste, ethnicity, profession, and education overlap with regional distinctions to create a complex system of language varieties in which sharp dialect boundaries cannot be drawn. Linguists have discerned two general pairs of dialect groups, however. The first is based on differing phonology: some groups use a “tight” phonation, spoken with a raised larynx; others use a “murmured” phonation, spoken with the intermittent lowering of the larynx. The second dialect pair is based on ethnicity, as there are recognizable distinctions between speakers who are Parsi and those who are Bohra.

As a result of the historically isolated situation of Sindh in the lower Indus valley, Sindhi is distinguished within Indo-Aryan by many linguistic features of its own. Its closest relative is Siraiki, with which it shares the four distinctive implosive consonants /b/, /d/, /g/, and /j/, which are pronounced with indrawn breath and contrast phonemically with the usual /b/, /d/, /g/, and /j/. Sindhi also preserves the old short final vowels lost in most other Indo-Aryan languages—e.g., gharu ‘house,’ ghara ‘houses,’ versus Siraiki (and Urdu) ghar ‘house, houses.’ Sindhi is further

Various indigenous scripts were formerly used by Hindu business communities to write Sindhi, but those are all now obsolete. The Muslim majority always favoured the use of the Arabic script with some necessary adaptations to record Sindhi sounds. Finally standardized in 1853 by the British colonial authorities, that Sindhi-Arabic script has since been in general use. Distinctively written in the printed naskhī form as opposed to the cursive nastaʿlīq used for Urdu, the Sindhi script has 52 letters (as against 35 in the Urdu script).

They include not only letters with special combinations of dots to write the implosive consonants and the distinctive set of nasal sounds but also numerous other dotted letters to write most of the aspirated consonants, such as bh, dh, th, and so on, that appear in Urdu as combinations of the simple consonants with -h.

The devotion of which they sang exemplified the new bhakti movement, which sought a more direct contact between humans and God, carried by a passionate love for the Deity, who would reciprocate by extending his grace to humankind. These saints became the inspiration of theistic systematic religion: the Shaivas for the Shaiva-siddhanta, the Vaishnavas for Vishistadvaita. In Kannada the same movement was exemplified by Basava, whose vachanas (“sayings” or “talks”) achieved great popularity.