STD 6 to 8 English Spelling PDF The English language is full of inconsistencies and irregularities, which results in unusual English spellings. The minute you find one rule that should cover every contingency, an exception pops up. To be literate in English takes a lot of work. It’s not an easy language to write if you’re not familiar with all the spelling rules – and the often larger list of exceptions. The ancient and esteemed pathway through which English has evolved has a lot to do with its spelling irregularities. One word may be spelled one way while the word that rhymes with it is spelled differently. Let’s explore some unusual spellings in English and commit them to memory.

When it comes to the differences in British English and American English spellings even brits get caught out occasionally. The main difference is that British English keeps the spelling of words it has absorbed from other languages, mainly French and German. Whilst American English spellings are based mostly on how the word sounds when it is spoken. English was introduced to what is modern day America in the 17th century by the British settlers. Since then the language has evolved and has been influenced by the many waves of immigration to the USA.

The spelling of British English words were cemented by Samuel Johnson in what is considered to be one of the most famous dictionaries in the world. It took Johnson, and six helpers, just over eight years to curate the 40,000 words that appeared in ‘A Dictionary of the English Language’, which was publihsed in 1755.

Similarly in America ‘A Compendious Dictionary of the English Language’ was first printed in 1806 and popularised the American English spellings that were being used instead of the British English spellings of words, such as color instead of colour. The author was Noah Webster who followed up the original dictionary in 1828 with his ‘An American Dictionary of the English Language’ which had over 70,000 words.

A small dictionary of important spellings in all the units of Standard 6 to 8 English Session-2 and all its activities is present in front of you in PDF. In this dictionary, unit wise spellings are placed along with their pronunciation, and Gujarati meaning, which you can also print and put on the display board. 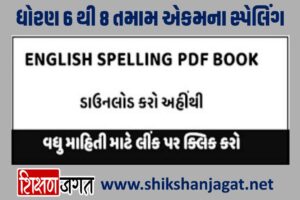 British English words that are spelled with the double vowels ae or oe tend to be just spelled with an e in American English: Although there are exceptions to the rule.  For example archaeology is spelt in the same way as British English but archeology would be acceptable in America but is incorrect in the UK.

Handy for teacher-created worksheets, games, and activities. Here is a peek at just a couple of the words, except accidentally acquire ambulance ancient appearance appointment arithmetic audience autumn beautifully beliefs contagious conversation cooperation correct STD: 6th to 8th class Spelling Word — Students, prepare for your next classroom competition with this carefully-selected list of 200 words. One hundred and two Frequently Misspell words: Study this list to boost your spelling abilities.

More tips for Building Spelling Skills — how to focus your instruction so that your upper elementary students will still improve their spelling. Step-By-Step Spelling Lesson Plans — Here is a very methodical way to teach, or learn, those trick words. Great for ESL students, primary school students, or tenners. You can use every step of this lesson, or simply those that you simply need.